How To Understand The San Antonio Market

We have been asked a lot within our networks as to what our opinion is on the San Antonio market and where an investor should focus based on the type of deals they are looking for. This had been information that we have put together for some of our investors. Because this is such a common question we decided to put this out for everyone to have.

In this post, we will break down the entire city based on our opinion of the market. Our opinion is based on our knowledge and experience in the REI industry.

San Antonio is a very diverse market with a transportation system that has made our city much different than any other. Most other cities that we have studied have some of the best and most expensive real estate closest to downtown. This is not the case as San Antonio currently sits. We agree with people in saying "invest where the jobs are" as people don’t want to drive an hour to work and fight traffic if they can help it. San Antonio, because of the military, built their roads system in the shape of a wagon wheel with major interstate and highways feeding our downtown area. 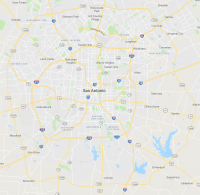 What this has caused is having the ability to live where you want to live as you can travel to pretty much every major employment district within 20 minutes without having to fight much traffic. You can see the effect this has had on our real estate pricing as some of the cheapest real estate you can find are right around our downtown area. We think the reason for this is because commercial developers could very easily build new building further away from the downtown corridor because the price of land and construction is more affordable. Taking those points into consideration is why we think our nicer more expensive homes are 10-20 miles from our downtown area.

So now that you have some background on the San Antonio market lets get to what deals come from where.

We classify a rental property in San Antonio as something to produces enough cash flow that it is a self-sustaining investment. Meaning it covers property management and a CAPEX of 10% of the rental price. This usually means there is a minimum $250/month in cash flow over PITI if you are leveraging. We have always seen the best rental properties coming from the suburbs.

The NW/W and the NE/E are where we see and have done the majority of our rental property deals. Although, as of lately we see a lot more coming out of the NE/E where the rent to value percentages are higher. Here is where we would go for the good ole fashion "boring" rental property that you can slowly build wealth, preserve it, and can retire on.

We like the areas following the 35 corridor because of the growth towards Austin. These would be the zip codes in the NE/E. This isn’t a blanket statement as there are still a few areas where we wouldn’t be looking to buy properties mainly in the East.

78244 – Just need to watch which neighborhood

Now for what most investors only look for is appreciation. If we had to make a bet on appreciation this is where we would go to get that exciting, risky, appreciation that you could quickly build wealth on. These are trends that we are seeing that we would bet on but they are still very dependent on the state of the economy and availability of funding for the renovation of commercial and city projects. So, while things look good there are projects that could get scrapped that could really mess an investment up.

Areas are seeing a lot of movement with the older homes that are not historical. These areas also pull decent rents so you may be able to get some cash flow in these areas. Where we are seeing the most growth right now is along the major highways moving into the city. We like these areas because as the downtown area is undergoing its revitalization you are seeing more and more people wanting to move closer to downtown which is showing growth. Now along 410, people tend to like it because you can get the urban feel but still have easy access to 410 and the Northside of the city. We are also, seeing that growth moving south because of the cheaper prices.

North of 1604 along 281 is the Stone Oak area where some of the best suburb style houses are. They are starting a five-year renovation of 281 outside 1604 taking out the stoplights adding 6 frontage road lanes, 6 expressway lanes, 2 HOV lanes, and flyovers connecting to 1604. Traffic is already extremely congested in this area and this is going to make it much worse for the next half-decade or until the project is complete. Combine that with what is going on downtown we are betting that you are going to stop seeing as much appreciation outside 1604 and start seeing it come back south along the 281 corridor to downtown.

Now for low-end big bets. Some of the cheapest real estate in the city is just to the east and west of downtown. Much like the east side of Austin was but now is some of the most expensive in the city. You can find cheap houses down there but there is no telling if they are ever going to take off in values. Some areas already are, and you are seeing houses being flipped for good profits. We know a lot of Austin people are buying properties on the east side betting San Antonio will to do the same as Austin did.

The only problem is they are betting on that to be their only strategy. This is pushing prices upon the initial purchase price but then they are just sitting on the properties not doing the renovations. If too many people buy these houses and never do anything with them it could affect the appreciation growth. There are a lot of projects that are in the cities plan and by private developers, but they are slow to take off. If these projects take off and are successful we would see these areas do well but you have the reverse side of that as well as they have been slow-moving projects. we would want to buy a property that at least still makes sense in today’s market. Get something that is at least livable that you can rent out and get a return on.

As far as south side goes, which we describe as anything south of HWY 90 and downtown, we really don’t know much about it to give a good analysis. We do know that is where you see a lot of seller financing going on and your low-end rentals (less than $1,000 Rents). We are starting to hear about pockets that are starting to do well but nothing that has made me want to venture to these areas. That said it is definitely something to keep an eye on as the city continues to infill and the city pushes for a more vibrant downtown.

Well, there you have it. That is our opinion on the San Antonio market and what type of deals come out of where.

If you are interested in more information we put a market report out every month that follows what pricing is doing in what areas of the city.